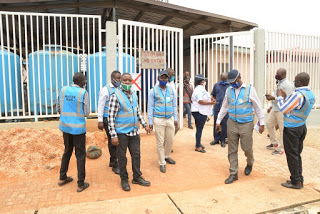 According to LSWRC, the water plant did not meet the required safety and quality standard.

The regulatory compliance seal order on the BIPORAL water plant supplying water to residents of Banana Island in Ikoyi followed tests earlier conducted by the LSWRC, which showed that the water quality of the plant was unsafe for consumption and needed to be subjected to improved treatment.

Addressing reporters at the site of the plant during quality control enforcement, Executive Secretary Mrs. Funke Adepoju said the decision had to be taken in view of the need to protect residents from consumption of unhygienic water, which was harmful to health.

She said the plant would remain shut until improvements were carried out by the service provider, in line with the drinking water quality control of the government, adding that the plant would be recertified safe to resume operation.

“It is important to note that drinking water must be safe and wholesome, free from pathogenic agents or harmful chemical substances. It must comply with prescribed standards of the World Health Organisation (WHO) and the Lagos State drinking water guidelines. We have tested their water and wastewater and results show that they fall short of the prescribed limit. The service provider is obligated to deliver water that meets quality specified by the regulator.

“The service provider needs to ensure the functionality of the water and wastewater treatment plants. This is basically to protect the consumers, which is what is paramount to us as a government. For now, the plant will not operate until the necessary treatment is carried out,” Adepoju said.

She said the government was interested in the quality of water residents consumed, noting that no unwholesome practice that would endanger people’s health would henceforth be allowed.