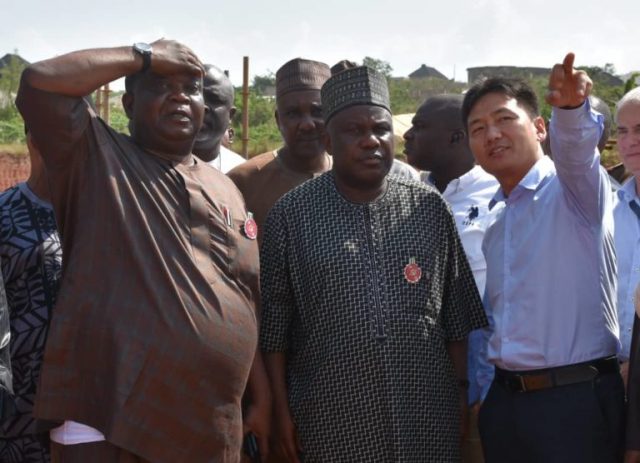 The Joint Committee on Land Transport of the National Assembly during the weekend inpected the Lagos-Ibadan Standard Gauge Rail Line project and assessed the free train ride flagged off on the corridor on Monday.

The federal lawmakers on oversight functions were led by Sen. Abdulfatai Buhari and Hon. Abbas Tajudeen, Chairmen of Senate and House of Representatives Committees on Land Transport.

The free train ride from Iju in Lagos to Moniya in Ibadan, which was flagged off by the Minister of Transport, Mr Rotimi Amaechi, on Nov. 29, started on Monday, running one return trip daily.

Buhari, who noted that rail transport was key to economic development, said that the present administration was determined to bequeath to Nigerians good rail transport facilities that would be linked to sea ports and airports.

According to him, the committee is very pleased with the progress of work and the train ride.

He said that the National Assembly had been approving huge amounts of money for the development of rail transport, and would not relent until the country would be completely connected by rail.

“Just three days ago, we passed the appropriation bill. A lot of money was allocated to railway. It has always been a cardinal point or focus of the administration.

The senator commended the management of the Nigerian Railway Corporation (NRC) for the free train ride on the completed part of the corridor -from Iju in Lagos to Moniya in Ibadan – saying it would bring succour to the masses.

According to him, the train test-run will alleviate the suffering of the people this Christmas season.

“We are very pleased, we hope Nigerians will be happy with what the NRC is doing. The main intention is to commission this project in April.

“Immediately after that, we will commence the Ibadan to Kano rail line project. The ride we had was really beautiful.

“Imagine a project that they promised they are going to do within three years, and now in two years, they are completing it and we are test-running it,” he said.

He said that the train service would serve as an alternative for to road transport.

“It will give our roads a good lifespan such that we will have enough room to maintain our roads.

“Rail transport all over the world is key. We have not reached there, but we are going there,” the senator representing Oyo North said.

According to him, the project has been extended from Ebute Meta to Apapa Port, Lagos, for cargo evacuation to the hinterlands in order to ease road traffic on that axis.

He said that there was also a consideration to extend the project from Ebute Meta to the airport and Tincan Island Port in Lagos.

“This thing takes time, it is not something we can do in a year and it is very expensive.

“We need a lot of funds. Next year, we are launching the Eastern Zone which is Port Harcourt to Maiduguri.

“It takes a lot of money. Itakpe-Warri is ongoing, Kaduna-Abuja is working, Lagos-Ibadan now working. Gradually we will we be there,” he said.

He appealed to the China Civil Engineering and Construction Corporation (CCECC), the contractor handling the project, to establish assembly plants in Nigeria and train Nigerians for rail maintenance.

Commenting, Abbas described the project and the ride as impressive especially as the project would be delivered six months earlier than the projected time.

“The level of work being done is quite impressive. Considering the period of time given to them (CCECC) to complete this project, the contractors are doing a wonderful job,” he said.

The Managing Director of the NRC, Mr Fidet Okhiria, expressed delight that the joint committee was pleased with the project and the train ride.

Okhiria expressed confidence that when next the committee would visit, the work would have reached Agege and Ebute Meta.