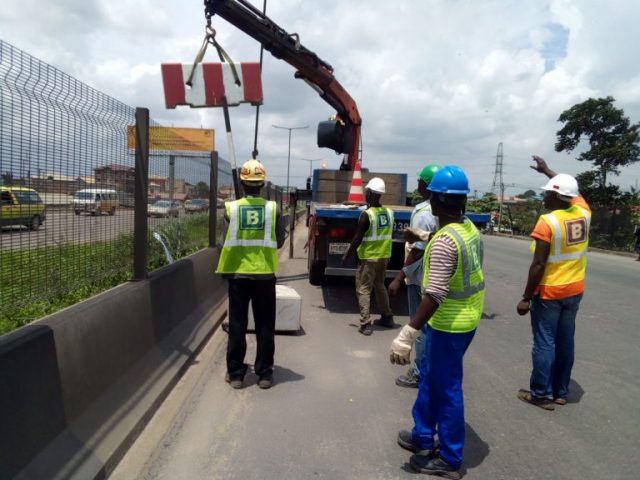 Motorists plying the Lagos-Ibadan Expressway on Monday appealed to traffic regulatory agencies to manage traffic beyond closing hours, to minimize the impact of gridlocks arising from the partial closure of the highway.

600 metres stretch of the highway was shut early on Monday from Kara Bridge inward Ojodu Berger on the Lagos bound carriageway for repairs.

When newsmen visited the site, a large deployment of policemen and traffic regulatory agencies could be seen at the Isheri intersection on Berger Bridge.

Also, patrol vehicles of the agencies were seen on various points on the corridor.

Traffic was diverted from Kara Bridge and vehicles both inbound and outbound Lagos, used the Lagos bound carriageway up till Isheri junction, where it redistributes into normal lanes.

Officials of construction giant, Julius Berger were demarcating various sections of both carriageways of the highway with crash barriers.

The officials also used cranes to relocate some crash barriers using them to demarcate the highway as well as redistribute some concrete bases to hold additional diversion signs.

Warning and diversion signs were placed on various sections on both carriageways.

Explaining reasons for the relocation of some crash barriers to the entrance of the Kara Cow Market, an engineer on site said that it was to prevent reckless disregard for traffic rules.

The engineer who spoke on condition of anonymity, said that traffic was being diverted behind a filling station, where motorists could enter the cow market.

“We have to block the entrance so that commercial drivers will not use the road shoulder here to drive against traffic or cause any confusion in front of this market,” he stated.

Some road users, who spoke to NAN appealed to the traffic regulatory agencies to continue in the zeal of the first day, to prevent gridlock in the days ahead.

A commercial motorist, Olumide Ashade, who plies the Ketu Berger route, told NAN that there were fears of gridlock during peak periods and appealed for measures to prevent it.

“Our fear is that during the rush hours there will be traffic. We expect go slow in the morning and during closing hours, that is when the traffic people should work more, ” he said.

Mr Olaiya Akeem, an automobile engineer residing at River Valley Estate in, Ojodu, told NAN that whatever discomforts experienced would be for the overall good of road users.

“The road is for our good. So we have to bear all the discomforts but they should hurry the construction to reduce suffering,” he said.

A student of the Lagos State Polytechnic, Miss Yemisi Dada, appealed for speedy completion of the highway and effective traffic management.

“I appreciate LASTMA, FRSC and the police because they are all here, but I am begging them not to get tired. They should continue with this effort so that there will not be go slow,” she said.

The Federal Ministry of Works and Housing engineer supervising the project, Mr Kayode Ibrahim, told NAN that additional lanes were constructed before the diversion to prevent gridlock.

Ibrahim explained that two lanes were added on the 600 metres stretch, to ensure that the width of the road was still the same, irrespective of closure of Lagos bound carriageway.

“All the traffic agencies are on ground, everything is fine and there cannot be congestion.

“If motorists are patient, obey traffic rules and maintain lane discipline, everybody will move because the road has not even been reviewed in capacity.

“The road is a two-lane road and we are still having two lanes on both sides. We expanded the road shoulders at the construction point, to four lanes.

“We did not reduce the number of lanes. The old road has two lanes on both carriageways, what we have done is to expand the road shoulders around the diversion point by additional two lanes.

“There are two lanes going out of Lagos and two lanes coming into Lagos at the diversion point.

“The reason for this is to ensure that motorists have the same width of road, both inbound and outbound Lagos.

“The diversion did not affect the size of the road and we are expanding the road shoulders on some other portions, ahead of construction on those portions.

“We are starting construction immediately after Kara Bridge, towards Lagos,” he said.