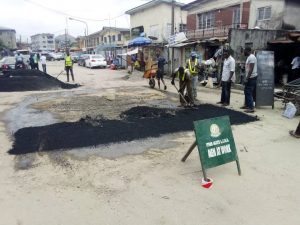 He appealed to residents to adjust to road diversion as the rehabilitation works go on.

Apatira made the call in an interview with the News Agency of Nigeria in Lagos while inspecting the project.

He was accompanied by the Council’s Engineer, Mrs Fumilayo Adesanya, to inspect the level of work done and to further earmark other roads for rehabilitation.

The council boss visited the sites at Anjorin, Abiodun Wright and Omilani Streets in Ikate Community where the maintenance work commenced simultaneously, while motivating workers and ensuring progress of the project.

NAN reports that the council plans to rehabilitate more roads causing heavy gridlock in the area and non-accessible roads in the area.

“The task of meeting the yearnings of the residents may look huge but it is very achievable.

“Besides, it is pertinent to state that Lawanson road by Otun-Oba Bus-Stop which had been a spot noted for gridlock in recent times was also rehabilitated to bring succour to motorists on that route.

“The job is being supervised by the Works and Infrastructure Department of Itire-Ikate LCDA,” Apatira said.

He said due to the ongoing rehabilitation, vehicular movements along the axis were partially restricted with diversion to other routes.

The chairman advised residents to imbibe the culture of cleaner environment and patronise the Private Sector Participation (PSP) for the evacuation of waste generated.

“The rains are here and I urged the residents to desist from patronising cart pushers, as they are the major cause of indiscriminate dumping of refuse at some black spots.

“Let us endeavour to bag our refuse, put them in the bin and place them where they are easily evacuated by the PSP, who are the authorised waste managers in the state,’’ the council boss said.

Apatira said that the council officials intended to go round all the communities in the LCDA, including Itire, Ikate and Ijesha to assess the access roads for easy vehicular