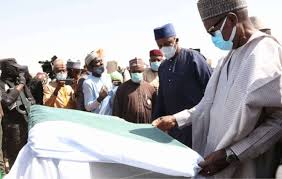 Amid the criticisms that are trailing the the Kano-Maradi railway project, President Muhammadu Buhari has said that the project will be beneficial to 80 million people  when completed.

The rail line begins from Kano and passes through  Daura, Katsina and up to the border town of Jibiya and the Niger Republic city of Maradi.

The multi billion dollar project would springboard  import and export of goods among Nigeria, Niger and other neighbouring landlocked countries.

The President said this on Tuesday when he presided, virtually, over the groundbreaking ceremony, of the project.

The groundbreaking ceremony was performed by Transportation Minister, Rotimi Amaechi performed in company of some other Ministers at Federal Executive Council (FEC), governors and legislators.

Speaking on the the economic viability of the project, President Buhari said: “This vital infrastructure line will establish an end-to-end logistics supply chain in railway transport services between northern and southern regions of the country, reaching Nigeria’s southern ports of Lagos and Warri.

“The entire route encompasses territory inhabited by close to 80 million people across 10 states of the country. This project has a branch line to Dutse, the capital of Jigawa State, to open up this corridor which is endowed with vast agricultural and mineral resources.

“The Kano-Maradi rail line has been identified as a viable line that will significantly enhance the movement of passengers and freight to the hinterland, especially raw materials from both agricultural and mineral resources, for our industries.”

He added: “The project, when completed, would serve import and export of goods for Niger Republic and other countries in the sub-region through the Nigerian ports.