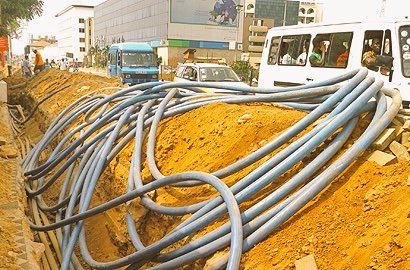 Some ICT experts on Monday urged the Federal Government to invest more in telecommunications infrastructure to deepen broadband penetration in both rural and urban areas.

The experts made the appeal during the 10th Edition and Awards of the E-World Forum held at Victoria Island, Lagos, which had as its theme: “Roadmap to Broadband Everywhere”.

Mr Gbenga Adebayo, President, Association of Licensed Telecoms Operators of Nigeria (ALTON), said that to deepen broadband penetration and build smart cities, it was essential to have reliable infrastructure.

“The economy depends on telecommunication infrastructure, hence the need for Nigerian Communication Commission (NCC) to look at the state of health of licensed operators.

” Also, to make more progress in the telecommunication industry, the government needs to address the issues of Right of Way (RoW) and multiple taxation.

‘’Telecommunication is a critical national infrastructure, the government needs to take the bull by the horn in addressing issues that concern the industry, “Adebayo said.

Speaking on 5G technology, the ALTON president noted that it was a welcome development, urging the government to implement policies that would enable its successful deployment in the country.

In his remarks, Muyiwa Ogungboye, Managing Director, eStream, said that 5G technology was good with its enormous advantages, but more base stations were needed to be able to achieve the technology in Nigeria.

” At the moment, in terms of how far we have gone with 4G, only few cities like Lagos, Abuja, Port Harcourt and maybe Ibadan really have access to it.

” 5G is good, but we have not really harnessed the value of 4G, so it is imperative that we take it step by step by ensuring that more cities and rural areas have access to 3G and 4G, before moving on to 5G,” he said.

Talking on Smart cities, Ogungboye said that it would be fantastic to have it everywhere and not in few cities.

A smart city is an urban area that uses different types of electronic Internet of Things (IoT) sensors to collect data and then use these data to manage assets and resources efficiently.

He noted that to have smart cities everywhere, the government needs to invest more on telecommunication infrastructure.

Ogungboye also spoke on the need for the government to structure special funds for telecom providers to be able to enhance their quality of service.

Teniola Olusola, the President of the Association of Telecommunication Companies of Nigeria (ATCON), said that the earlier the nation embraces digital transformation, the better.

Olusola, who was represented by Mr Ajibola Olude, Executive Secretary of ATCON, said that digital transformation would solve the issue of unemployment, urging the government to invest more in that direction.

He said that to solve the issue of digital divide, the government needs to roll out telecom infrastructure in the rural areas, to bridge development gap.

Mr Tunde Coker, Managing Director of Rack Centre, said that to drive the quality of services provided by telecommunications operators, it was essential to solve the issues of right of way.

Coker said that once there was improved service, the country would be able to achieve more than 33 per cent broadband penetration.