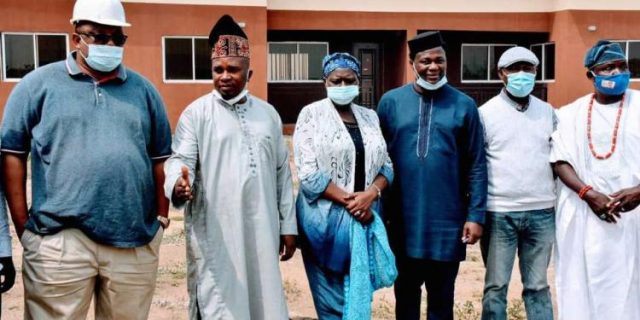 Not less than five developers have commenced construction of 900 housing units at Ajoda town, Ibadan, the Oyo State capital.

The construction is  under the Federal Housing Authority (FHA) scheme.

The Ajoda housing scheme is the first FHA housing estate in Ibadan, to be handled by five development partners.

Some of the partners in the project include Woodston Construction Company, Greenwood Company and Timik Engineering.

The Managing Director of FHA, Senator Gbenga Ashafa, who disclosed this in Ibadan at the handing over of site to the developers, said the project would be completed in 24-months.

Ashafa, who was represented by the FHA’s Southwest Zonal Coordinator, Mrs. Oluwatoyin Bada, urged the developers to abide by the terms of Memorandum of Understanding (MoU).

He expressed hope that the handing over date of the housing projects remains January 20, 2021 as all arrangements have been put in place for a smooth take off.

‘The land surveyor is right here and he is going to take us round the site to an extent where he can, so that you can start clearing. Clearing is very important, as you have seen the team here; the engineer, the town planner and the architect, except the site is cleared there is really nothing much that can be achieved. The contracts state how many buildings and from what end to what end,” he said.

Also, a board member of FHA, Olakunle Busari, tasked the developers on proper documentation to avoid any hitch as works progress.

He stated that every activity carried out would henceforth be documented with pictorial evidence, as verbal explanations would no longer be entertained.

According to him, FHA must be carried along in all the undertakings on the site.

One of the development partners and Managing Director of Woodston Engineering, Dr. Mike Anjorin, assured FHA officials that security would be given the necessary attention to avoid vandalism as witnessed in the past.

Anjorin, who is developing 212 units of housing and Infrastructure, said the handing over of the Ajoda site was indicative of the commencement of works on the site.

“The total housing units for all partners are 900 out of which 208 units were allocated to my company, Woodston Engineering and Construction and we are also doing infrastructure .’’

Also, the Chief Executive Officer of Greenwood Engineering, Mr. Ige Ayeni, another development partner, extolled FHA for following through on its words despite the initial delays. The Guardian