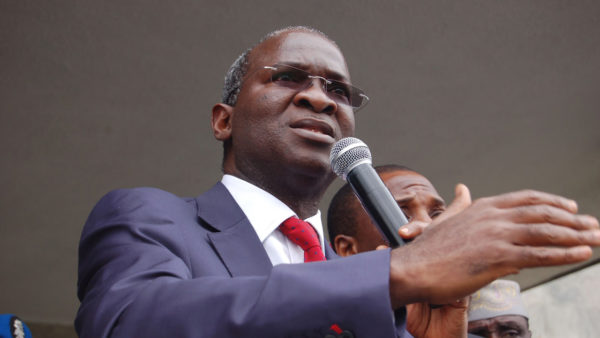 Mr Funso Adebiyi, the Director of Highways, South-West zone, Federal Ministry of Works and Housing, has given assurance that Federal Government would complete  all road projects in the Southwest zone and across the country.

Adebiyi dropped this hint in Ibadan while speaking with newsmen after an inspection tour of some road projects under construction in the zone.

According to the director, the Federal Government is giving due attention and priority to speedy completion of its road projects in the Southwest and other zones across the country.

He said that government was working assiduously to ensure that all roads in the country received attention and were motorable.

On the Lagos-Ibadan road, Adebiyi said that the project, which started in 2013, would be completed in 2022, noting that there was an initial funding problem and inadequate budgetary provision for it.

“But it is now an isolated project with enough funds to complete it on time.

“I want to assure the general public that the ongoing work on Lagos-Ibadan road will not, cannot and will never stop until it is completed.

“The second section of the road, which is from Sagamu to Ojoo in Ibadan is 82 kilometres long and it is making significant progress.

“So far so good, we have about 45 kilometres that are ready, which represents over 40 per cent implementation stage.
“I want to appeal to motorists and other road users to cooperate with us, because in the process of doing these jobs, pockets of discomfort may come their ways but they should be patient,” he said.

The director further said that work was gradually moving to densely populated areas such as Ogere, with its peculiar challenges “because of big concentration of articulated vehicles.’’

He appealed to the trailer drivers to relocate their vehicles from the area, saying they were obstructing the ongoing work on the road.

Speaking on the level of work on the 52-km Oyo-Ogbomoso road, Adebiyi said that the project, which was section three of the Ibadan-Ilorin dual carriageway, was at an advanced stage of completion.

According to him, the aim of the project is to link Ogbomoso without passing through Oyo town.

although he said that the initial projection was to expand and dualise the road, he, however, pointed out that the old alignment could not be dualised due to the development and expansion of residential buildings.

This, he said, had brought the idea of the new alignment, stressing that the project was progressing steadily, with the contractor doing extensive work.

“Quality assurance mechanisms are put in place to ensure that we do not compromise the quality of the job,” he said.

The director disclosed that the job implementation on the road had reached 73 percent of the original scope given to the contractor.

“However, due to the problems not envisaged before, additional works have emerged and we have prepared augmentation for this, which may increase the cost of the project,” he stated.

Adebiyi, however, stated that the project was not without its own complications and difficulties, adding “but we are facing them one after the other.”

He cited the issue of underground water movement as one of the challenges which was not envisaged at the initial stage.

The director also said that indiscriminate erection of buildings on the alignment was another challenge, urging the town planning authority in Oyo state to stop giving approval to people to erect structure on the alignment.

Commenting on the ongoing construction work on Ofosu-Ajebandele-Sagamu road, Adebiyi expressed satisfaction on the level of work done by the contractor handling the project – Reynoid Construction Company (RCC).

Some of the motorists plying Ore-Sagamu road lauded the efforts of the Federal Government in reconstructing the road.

Messrs Sunday Keku and Peter Nbanu, both commercial drivers plying Sagamu-Ore and Onitsha-Lagos roads respectively, said they now spent lesser hours on the road unlike before when the deplorable condition of the road made them waste quality time.

The duo urged the Federal Ministry of Works to properly supervise the road project so as to ensure that the contractor delivered quality job.