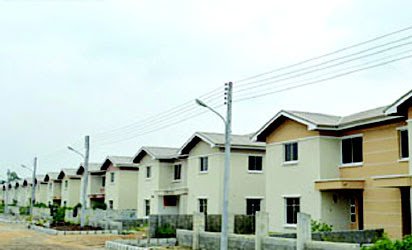 The National Housing Project of the Federal Government in Ekiti is to be completed by April.

The South West Zonal Director of the FG’s National Housing Project, Mr Olasunkanmi Dunmoye, made this known in Ado Ekiti.

Dumoye spoke during an inspection tour of the project, situated along Agric Olope area of the state capital.

He said the project was designed by the Federal Government in 2016 to ameliorate the sufferings of poor Nigerians, especially in the area of affordable shelter.

According to him, more than half of the houses have reached 100 per cent completion, while the remaining are in various stages.

He also said the road network project within the environment, including electrification and water provision had equally reached between 40-70% completion stages.

He explained that the project could not be completed early like other states, because the land originally allocated for it by the state government under the administration of former Gov. Ayo Fayose was considered too far from the city centre.

” It was after then that we reached an agreement with the former government which gave us an alternative land at the centre of the state capital where we are presently.

“But with a condition that we must rehabilitate the Agric Olope access road which we have now done,” he said.

Dunmoye said a total of 15 contractors were engaged on site to prosecute the housing project, but said no fewer than 1,750 persons are currently employed either directly or indirectly on site.

On complaints by some of the contractors that they had not been fully mobilised for jobs already done, the zonal director said list of contractors affected would soon be compiled and sent to Abuja for clearance.

He, however, frowned at the attitude of some contractors who had refused to make appearances for the jobs ceded to them.

He threatened that government would substitute them soon if they failed to retrace their steps.