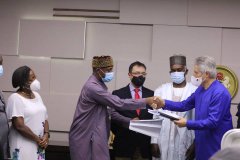 The Federal Government has officially signed the documents for the kick-off of Kano-Maradi, Kano-Dutse railway project.

The intimation was made by the Minister for Transportation, Rotimi Amaechi via his Tweeter handle.

The Minister also revealed that the contactor has agreed to establish a university in the axis as part of Corporate Social Responsibility, CSR

The tweet reads: “Today, we signed the contract documents for the commencement of the Kano-Maradi, Kano-Dutse railway project.

“The contractor, Mota-Engil Group, a Multinational Engineering & Construction firm has also agreed to build a University as part of their CSR while working on the project.