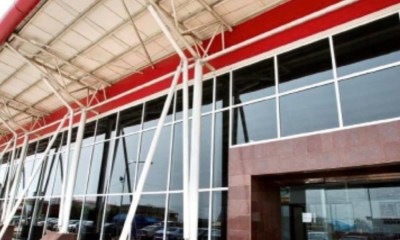 The Minister of State for Aviation, Sen. Hadi Sirika, on Monday inaugurated the newly completed international terminal for Maiduguri International Airport, which had commenced since 2013.

Sirika, while inaugurating the project in Maiduguri, said the completion of the project was a fulfilment of President Muhammadu Buhari’s administration to complete all ongoing projects across Nigerian airports.

He said that the project was one of the 157 projects commenced by the government in 2015, adding that 134 projects had so far been completed.

“Maiduguri airport terminal rehabilitation commenced in 2013 and was abandoned but in the spirit of President Buhari’s leadership style, he urged the completion of all abandoned airport projects and this is one of them.

“It underscores the importance of Borno as a state in the North-East, and having been ravaged by insecurity.

“We give importance to this airport and many other facilities that will ensure safe and secure airport operations.

“There were no scheduled flight to Maiduguri airport before the coming of President Buhari, but now you can see Azman Air here, its scheduled service into this airport.

“We will continue to improve upon this airport to ensure the security and safety of it operations.

“This is a continuation of all the projects that we are going round the country to inaugurate.

“We started many of them and we met many, and we have completed 134 of them and the remaining 23 are more than 50 per cent at completion stages.

“I can assure you that soon after the next minister has come on board, he will complete all of those remaining projects to ensure that the 157 projects are completed,” he said.

Sirika promised that all the ongoing projects in aviation sector would be completed by any minister that would take over from him.

He said that the government would provide all equipment needed for the airport to commence Hajj operations alongside scheduled flights.

The Shehu of Borno, Abubakar Ibn Garbai, requested for the upgrade of the airport to be able to accommodate Hajj operations.

He also commanded President Buhari for his efforts so far in making sure that the state was liberated from the control of the insurgents.

Garbai noted that prior to the coming of Buhari into power, the airport was closed down for two years and it was due to the intervention of the president that the airport was reopened.

“Our airport was closed for commercial flights for over two years before the coming of the President Buhari.

“We did not have any good road, the only good roads we had was from Maiduguri to Cameroon all other roads were besieged by the insurgent.

“The borders were very porous. We share borders with Niger, Chad and Cameroon, the criminals were coming in any time they like, and they will kill people and go back at will.

“At that time, Maiduguri was hosting about 2million internally displaced persons comprising of mostly children and women.

“However, immediately Buhari came to power, because of his care and concern for the people of the state, the first thing he did was to relocate the Military command and control from Abuja to Maiduguri, he said