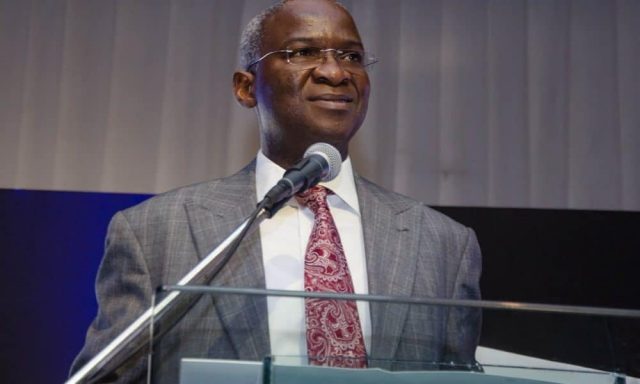 The Federal Government has approved over N19 billion for the construction of road projects in the Federal Capital Territory (FCT), Oyo and Kano States.

The Minister of Works and Housing, Mr Babatunde Fashola, disclosed this when he briefed State House correspondents on the outcome FEC meeting in Abuja.

He said: “The second memorandum we presented was for the award of three roads in Igboho-Oloko-Agbonle in Oyo State and Gulu to Yaba town between the Federal Capital Territory and Niger State as well as Sharada to Madobi and Danbaure in Kano State.

Fashola disclosed that the Council also approved N523 million for the completion of Efalaye-Erimo-Iwaraja road linking Ekiti and Osun states.

He said: “The first memoranda was to approve the change of rates with respect to the Efalaye-Erimo-Iwaraja road linking Ekiti and Osun states.

“That road was awarded since 2009 and the contractor has achieved about 85 per cent of the work so we are trying to complete that road, it had been slowed down by previous years of insufficient budget.

”During that period the price at which it was awarded and today’s material prices have altered significantly so he is asking for a review of N523,826,000, which has been approved,” the minister stated.

He explained that the Ministry of Works also intimated the cabinet on the number of roads done so far across all the states of the federation, saying 524 roads are currently ongoing.

According to him, 43 internal roads are being constructed in campuses of the nation’s universities, out of which 10 have been completed

Also, Mr Lai Mohammed, Minister of Information and Culture, said the Council ratified the Treaty on the Prohibition of Nuclear Weapons as presented by the Attorney-General of the Federation and Minister of Justice, Abubakar Malami.

He explained that the treaty was meant to free the world of nuclear weapons.

According to him, the treaty does not, however, impede the rights of signatories to develop nuclear energy for peaceful purposes.