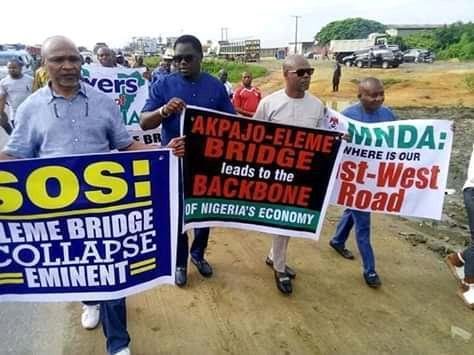 Some members of the National Assembly from Rivers have called upon the Federal Government to effect repairs on the dilapidated Akpajo/Eleme Petrochemical Refinery Bridge.

The legislators made the appeal on Monday during an interactive session with journalists, when they embarked on a peaceful protest at the foot of the bridge in Eleme, Eleme Local Government Area of the state.

The placard-carrying legislators, led by Sen. Bari Mpigi, representing Rivers South-East Coustituency, alleged that the bridge could no longer accommodate further pressure having been long overdue for repairs.

The national assembly members also expressed dismay at the level of neglect they alleged was accorded to the bridge by the Federal Government and the Niger Delta Development Commission (NDDC).

“It is like we in Rivers state have been abandoned, this is not a state government road, it’s a Federal Government road.

“As we speak, passing through this bridge, you will understand that any moment from now, this bridge will collapse if not urgently addressed.

“And that means that the total lives of this area will be cut off,” he said.

Mpigi also said that their protest became necessary to keep Nigerians abreast with efforts by the lawmakers in ensuring that the plight of road users and the national economy was adequately protected.

“In essence, we are here this morning in protest to let Nigerians know that this road’s contract has been awarded for a long time, the Vice-President has been here and even the NDDC has taken the dimension of the bridge.

“But till date, the contract has yet to be executed, we are aware that this job was awarded to a construction company, RCC.

“I think over N2 billion was initially disbursed for the Akwa-Ibom/Ogoni axis but the contract valued between Ogoni down to Eleme Junction axis is yet unknown to us,” Mpigi said.

Reacting, Rep. Kingsley Chinda, lawmaker representing Obio/Akpor Federal Constituency and Leader, said that the economic benefits of the bridge could not be over emphasized.

He said that the bridge traversed Akwa Ibom, Cross River and other national economic hubs was like an economic spine of the country.

Chinda said: “You must go through this bridge to be able to access the Port Harcourt Refinery, the Petrochemical Refinery, Fertiliser companies, the Nigeria Navy Training School and the Onne Sea Port.

“But because this is Rivers State, we have found out that there is a grave yard silence to issues that concern this bridge and the entire section of the East-West road.

“Having brought a motion on the floor of the National Assembly, members have supported that the executive arm should quickly ensure that this bridge is taken care of to forestall incidents that may lead to loss of lives.”

He also alleged the executive arm had proven insensitive to the resolutions of the National Assembly.

“That is why we are now taking it to the court of public opinion,” he said.

Also, Mr Igwe Aforji, lawmaker representing Eleme State Constituency, said that the state government on its part had tried to no avail to synergise with key stakeholders on the project.

He said that Gov. Nyesom Wike of Rivers had earlier, through the Permanent Secretary, State Ministry of Works, ordered for ascertainment of the level of damage and provision of palliatives for the collapsing bridge.

Aforji also alleged that “two days into that intervention process, the NDDC came in and halted the process, stating that the road is a federal project”.

“We are here to call on the Federal Government and the NDDC to swing into action and save this bridge from complete collapse,” Aforji said.