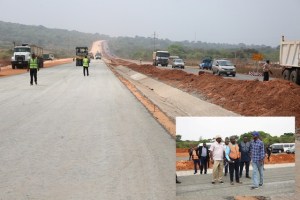 The Minister of Works, Power and Housing, Mr Babatunde Fashola has charged contracting firm handling the rehabilitation of Umunya /Amawbia axis of Onitsha/Enugu expressway to expedite action in its work.

Fashola gave the directive during an inspection visit of the project site at Umunya, Oyi Local Government Area of Anambra on Friday.

Represented by Mr Yemi Oguntominiyi, Director Federal Highway in the Ministry, Fashola said he was impressed with the quality of work, but stressed the need for faster action.

“When the minister visited this site last February, the contractor assured him that before the rains set, it would complete 18 kilometers Enugu-bound site of the Umunya/Amawbia axis.

“Though the quality of the work I have seen is okay, with all the machines and workers, let faster action be seen on this project,” he said.

The minister noted that the project was very important to the federal government given the fact that the road connected many states in the South-East and the North.

Mr Adeyemo Ajani, Controller, Federal Ministry of Works, Power and Housing, Anambra said his officials regularly visited the site, noting that all the challenges raised by the firm had been addressed.

He promised that the project would be delivered in line with stipulated agreement with government.

The minister’s representative visited members of the Oyi Local Government Area Traditional Rulers Council at their Secretariat in Nteje before the road inspection.

The minister also used the occasion to perform the ground breaking ceremony for Umunya/Awkuzu Federal Sites and Services Housing Estate before the inspection visit to the Federal Secretariat, Awka.