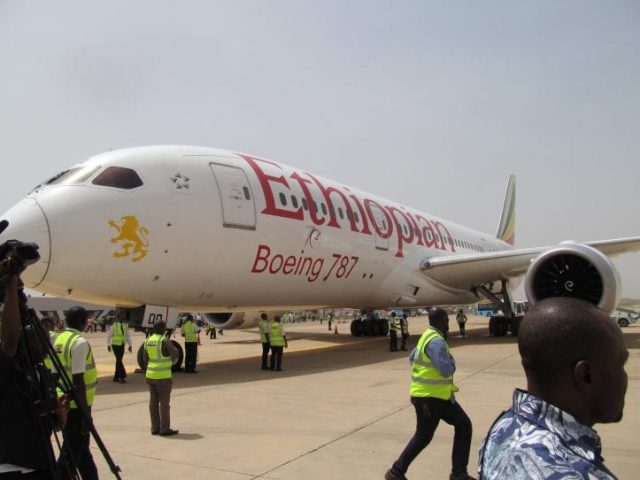 Big Brother has landed in Nigeria.

No. It’s not the reality show but a new aircraft acquired by Ethiopian airlines.

And on its first trip to Nnamdi Azikiwe International Airport, Abuja, it brought 177 passengers to Abuja. That is the Boeing 787 or B787-9 .

The aircraft, which is code named,‘’Big Brother’’, touched down at 11:45a.m with 27 business class and 150 economic class passengers with the usual flight shower.

The new aircraft was welcomed by the officers of the Airport Fire Service with the usual flight shower to mark the arrival of new aircraft to the airport.

The airlines Sales and Traffic Manager, Firiehiwot Mekonnen said the new aircraft, which is a 315-seater comprising 30 business class and 285 economy seats, was the newest of Boeing aircraft in the world.

Mekonnen said the decision to fly the aircraft to Abuja on Tuesday was to give passengers the opportunity to experience its comfort.

She said the aircraft was a month old in Ethiopian airlines’ fleet, adding that it would be flown to all its 100 destinations around the world.

“The aircraft landed at Kinshasa on Monday, Abuja Tuesday and would be in Ghana on Friday.

“We flew in 27 passengers on business class and 150 on the economy class because we want our passengers to experience the comfort of the newest aircraft from Boeing, the 787.

“The B787-9 is part of its commitment to deliver an exceptional level of service to the African market by operating the latest technologically advanced aircraft in the market.

“Ethiopian Airlines has always flown to and from Abuja with its newest aircraft.

“It brought the Dreamliner B787 to Abuja in 2012 and reopened the Abuja Airport this year with the A350 when the Airport was reopened after 6 weeks closure,’’ she said.

The pilot of the aircraft, Michael Yilma said that the aircraft was the most economical in terms of fuel consumption and noise.

Yilma said that he was one of the first pilots to be trained on the aircraft, explaining that Ethiopian airline was the second to acquire the B787-9 after Japan.

He said that passengers had enjoyed the unique onboard features of the latest technology aircraft such as the biggest windows in the sky, high ceiling and less noise.

“And because I have been flying Boeing for five years now, I can say that this aircraft is the best so far.

“What makes it different from other aircraft is its noise level and it is very economical and the quality of the air in the cabin is superb.