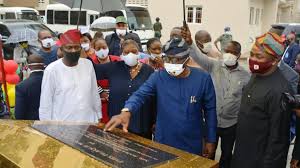 The Lagos State Government has asked allottees of its various public housing estates who have not completed their payments to do so or forfeit their rights over the housing units.

Acccording to the state government, the state said the notice was particularly directed at those who enrolled for homes

Permanent Secretary, Ministry of Housing, Mr Wasiu Akewusola, made this remark while inspecting ongoing constructions of housing schemes in the Sangotedo and Epe axis of the state

He lamented that government’s revenue has been greatly affected by defaulters in some of the existing estates.

He noted that offer letters for those housing units were issued to beneficiaries only after they had consented to the terms and conditions of the State Government.

One of the conditions  included the forfeiture of homes in case of incomplete payments at an agreed date.

He called on  those concerned to ensure that full payment is made after  clearance and bills have been obtained from the Estate Department, Ministry of Housing having paid through bank drafts.