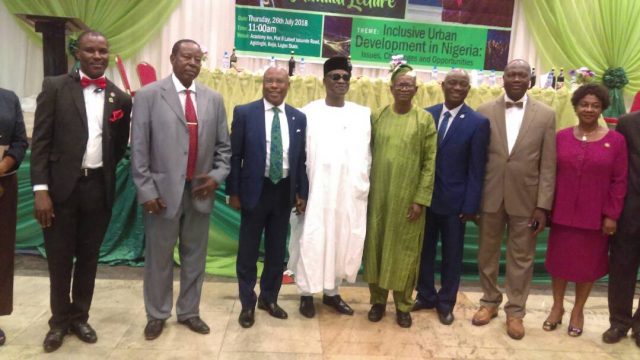 Lagos state Commissioner for Physical Planning and Urban Development, Rotimi Ogunleye has urged Town Planners to play more active role in the infrastructure and Urban development of the state.

Ogunleye gave the advice at the maiden editions of Femi Olomola Annual Lecture, organised by the Nigerian Institute of Town Planners (NITP) in Lagos.

The theme of the lecture was: “Inclusive Urban Development in Nigeria: Issues, Challenges and Opportunities”.

He admitted that planning a city is tough, as a result-oriented stakeholders meetings and involvement should be paramount.

According to him, many of the sub-Saharan African major cities are rapidly going through a process of urban restructuring and physical transformation in their struggles to be integrated into the global economic system.

“To key-in into this new order of things, the administration of Governor Akinwunmi Ambode of Lagos State places high premium on building a collective stake in urban development planning and regeneration to foster inclusive sustainable Lagos smart city.

“Lagos, just like many other sub-Saharan Africa’s large cities, is cut in the struggles of managing population growth, urban development challenges and quest for urban modernity,” he said.

The Commissioner noted that an inclusive Urban Development model particularly in Nigeria can only be systematic, as it is rooted in a couple of principles that cannot be achieved overnight.

He commended the organizers for making Inclusive Urban Development a key issue of discussion at the lecture.

“This is bound to provoke a deeper understanding of the model and its positive implications in tackling city challenges and improving citizen’s quality of life.

“The renewed role for Urban Planning must incorporate the diverse views in planning decisions, consider the dynamic character of the urban area and thereby create a new form of urbanism: an urbanism for all and sundry.

“Stakeholders must be engaged in the development of plans and securing financial outlays for the implementation of selected priority projects.

“We are all resistant to change, nobody wants a change. But that change is necessary for a better future. And the Town Planners are professionally trained to effect the change,” he added.

Speaking at the event, the guest speaker, Oye Ibidapo-Obe, former Vice Chancellor, University of Lagos, said that infrastructure and Urban development was a collective responsibility of both the government’s and the citizens.

Ibidapo-Obe, a professor, said that rapid population growth and urban expansion exert heavy burden on urban facilities, saying that the rapid increase in slums calls the need for proper planning.

He said statistics suggests that about 70 percent of the population of Lagos live in slum, a reality that calls for concern, considering the investment status laws and regulations.

He said that the provisions of housing, serviced land, infrastructure and urban services and livelihood opportunities have not kept pace with the population growth.

“Slum, rather than sickness is just a symptom showing fundamental inadequacies in planning.

“Upgrading is any intervention that improves the physical conditions of a settlement, which in turn enhances the lives of its inhabitants.

“If the rural areas will be upgraded to be as comfortable as the urban cities, many people will prefer to stay there,” he said.

He added that proper planning brings about urbanisation, economic growth, job opportunities, among others.