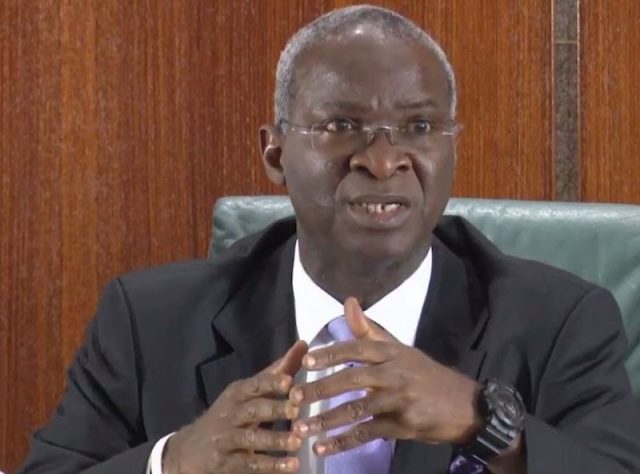 Mr Babatunde Fashola, Minister of Works and Housing, has said that cases of collapsed building should be investigated, culprits prosecuted and punished to curtail the incessant occurrence and protect lives and property.

Fashola said this recently when a delegation of the National Building Code Advisory Committee visited him in Abuja to update him on the activities of the committee.

The minister said the committee should come up with measures that would ensure that people who were involved in erecting buildings that collapsed were investigated, prosecuted and punished to send a message that people could be held accountable for their actions.

According to him, the ugly incident kept reoccurring because nobody had been punished and made an example of wrong doing.

“After every unfortunate incident somebody has not been prosecuted. That is just the example that every society needs, to show that people are answerable when they do not comply with laws.

“There must be consequences for the lives lost and property destroyed, so you do it at your own peril so that a lesson would be learnt and this is how we can protect our people.

“If cases were investigated to a conclusive end and findings were made and culprits brought to book and punished to the knowledge of all the trend will end,’’ Fashola said.

He commended the committee on their work on Liquefied Petroleum Gas Piping to homes, saying that it would contribute to energy generation for the country and ultimately eliminate the era of gas flaring.

The minister said that it would enable many people that fear that gas was unsafe to use it and therefore, boost the economy.

Fashola charged the committee members that while trying to collaborate with state governors to domesticate the building code provisions they should involve other critical stakeholders such as students.

“It is important to involve governors in order to domesticate the code, even at that there are more critical stakeholders which are students.

“Every level of education, from primary to tertiary, should be carried along, for the primary section by breaking the modules so that it is simplified for pupils.

“Pupils should be taught some basic knowledge of essentials of building from childhood; you must have street level conversation so that there is connection with the ordinary people,’’ Fashola said.

He, however, directed the committee to publish the already reviewed building code that was reviewed since 2017 while updating it with new finding when the need arose.

Earlier, the Chairman of the committee, Mr Mohammed Fawaraja said the draft guidelines on the inclusion of liquefied petroleum gas piping in construction of houses into the Nigerian National Building Code has been produced and reviewed by the committee.

He added that the committee monitored new development with regards to policies, programmes and happenings as they concern building, construction nationwide.

Fawaraja said this was to keep members conversant with recent building activities within Nigeria and at the international level to facilitate quality contributions in the discharge of the committee’s assignment.

“The committee noted with appreciation that the Architect Registration Council (APCON) had taken the imitative to ensure that only qualified architects submit drawings for planning approval.

“The committee had discussions on the implication of seismic to buildings in Nigeria. This was prompted by the recent report of earth tremor in some parts of Federal Capital Territory and some part of the country in the past.

“The committee, therefore, set up an ad hoc committee to assess the situation and contact relevant agencies for briefing,’’ he said.

The chairman noted that the information gathered was helpful in making provision in the building code in the future having noted that Nigeria was prone to seismic challenges.