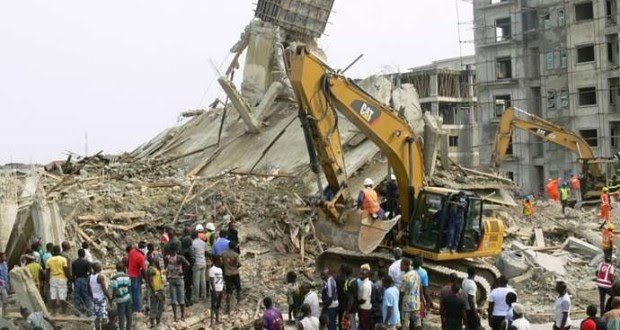 Prof. Lateef Onundi, of the University of Maiduguri (UNIMAID), on Wednesday advocated for the promulgation of a national code of practice to curb the frequent occurrence of building collapse in the country.

Onundi, who is a lecturer in the Department of Civil and Water Resources in UNIMAID, made this call at the Annual General Conference of the Nigeria Institution of Civil Engineers (NICE), Abuja chapter in Abuja.

The theme of conference is: “The Role of Nigerian Engineers, Regulatory Agencies and other Stakeholders in Building Collapse Prevention”.

The professor described incessant building collapse in Nigeria as highly unfortunate, calling on engineers in the country to work hard to stop the menace.

“If we do not take remedial action now, you saw my projection, many more buildings will collapse and many more people will die.

“Now is the time for action, we thank President Muhammadu Buhari for helping Nigerian engineers with the amended Act Bill 2019 that now empowers the regulatory bodies to prosecute whoever contravenes the provisions of our code.

“We do not have the same weather conditions, culture and so many other reasons even in the country so we cannot have a uniform condition all through.

“Close to the coastal areas, the type of problems we have there brackish water intrusion into fresh water and surface attack is very likely; we need to use special cement.

“Whereas up north the rainfall is not as high and soil structure bearing capacity is better and we can segment these to have different recommendations.

“By the time we put right the code of practice, we can now take that to the senate to pass the law to make it binding for all Nigerians,’’ Onundi.

The expert said with the code of practice, it would be mandatory for real engineering professionals to head relevant ministries and agencies thereby giving the appropriate recommendations when faced with critical situations.

Onundi said that government should make foreign companies with building projects establish their design offices in the country and indigenous engineers be made to be part of designs from the beginning to the end of any projects.

He said that most of the collapsed buildings were usually low rise buildings and not high rise building built by foreigners because of the facilities available for them to work with.

The don said that appropriate actions for effective collaboration with other professionals must also be projected for better project delivery and durability.

He cited a survey carried out between 1971 and 2016, it was discovered that building collapses occur as a result of structural failures, sub-standard materials, poor workmanship, faulty designs and use of quacks, among many other causes.

Mrs Aishatu Umar, the National Chairman, NICE said that people should learn how to engage professionals, stressing that a non professional would be more concerned with making profits.

Speaking on the integrity of buildings, she advised that anyone undertaking a building project must ensure it went through an integrity test to ensure safety of the people and durability of the building.

“If these aspects are neglected, buildings will continue to collapse, therefore, the right thing should be done to curb the menace.’’

Umar said the conference was another avenue to create the awareness and sensitise stakeholders and citizens on the harms inherent in engaging non professionals in building projects.

Mr Dominic Akuboh, the Chairman Abuja Chapter said the prevention of building collapse was a collective responsibility of all professionals within the built environment.

“Available records from workshops held so far indicated that more than 1,150 lives have been lost in at least 275incidences of building collapse since 1974 with Lagos having the highest frequency of occurrence followed by Abuja.

“In 2019 alone, 22 incidences in building collapse have been reported with the death of at least 41 persons.

“I therefore urge all stakeholders, regulatory professional bodies and members of built environment to collaborate effectively and efficiently by genuinely engaging one another toward reducing if not eradicating the menace of building collapse.’’