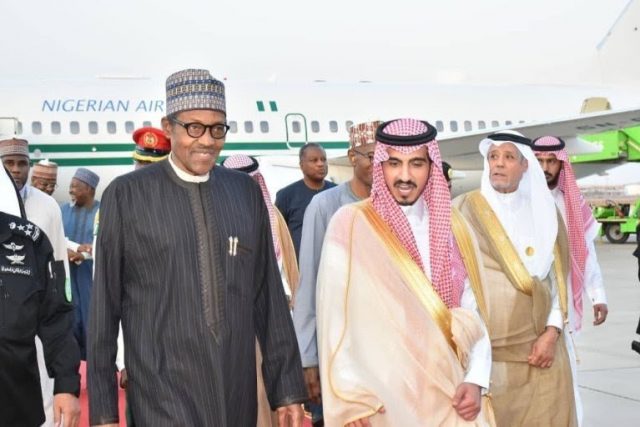 President Muhammadu Buhari on Saturday in Makkah, Saudi Arabia, commended the decision of the Organisation of Islamic Cooperation (OIC) to support the Inter-Basin Water Transfer project, aimed at recharging the Lake Chad.

The president, who gave the commendation at the opening of the 14thSummit of the OIC hosted by the Kingdom of Saudi Arabia, noted that the shrinking of Lake Chad to about 10 per cent of its original size had adversely affected over 30 million livelihoods in the sub-region.

He maintained that the shrinking had cause severe economic deprivation, fuelled illegal migration to Europe, the displacement of communities and radicalization of youth, forcing them to join the Boko Haram terrorist group.

“In this connection, we welcome the various interventions under the Special Programme for the Development of Africa, the Islamic Solidarity Fund for Development and the recent approved Science and Technology Fund, among others.

“We urge them to do more as their contributions towards poverty alleviation and peace building,’’ he added.

President Buhari also lauded the OIC for its engagement of the Islamic Development Bank Group in the implementation of national development projects in Africa.

According to him, the robust interventions of the various OIC institutions, particularly the IDB Group, had been effective in such key sectors as trade and investment, agriculture, rural development and food security.

He said: “For instance, we in Nigeria appreciate the Bank’s support for our National Food Security Programme and the various roads, school rehabilitation projects and the Second Niger Bridge.

“I am confident that the continued support of our multilateral partners, notably the OIC and the Islamic Development Bank Group, would be most needed as we seek to redouble our efforts in the next phase for the realization of rapid socio-economic development in Nigeria and the continent at large.

“In the cultural field, we acknowledge the importance of the OIC programmes, aimed at combating Islamophobia and the defamation of religions.

“We are convinced that the values of tolerance and moderation should continue to guide our actions as we collectively seek to promote global harmony, peace and security.’’

President Buhari, who acknowledged the intervention of the OIC in the field of science, technology and innovation, poverty alleviation as well as women and youth empowerment, also stressed the significance of the OIC Science and Technology Agenda 2026.

According to the President, science, technology and innovation as well as information and communication technologies are crucial to the realization of the Sustainable Development Goals and OIC 2025 Programme of Action.

He, therefore, reiterated the determination and commitment of Nigeria to supporting collaborative research programmes on science and technology.

President Buhari affirmed the African Group’s commitment to engage and cooperate with all Member States towards the success of the 14th OIC summit.

The Nigerian leader expressed appreciation to the Custodian of the Two Holy Mosques, the government and people of the Kingdom of Saudi Arabia for the elaborate arrangements made for the success of the summit.