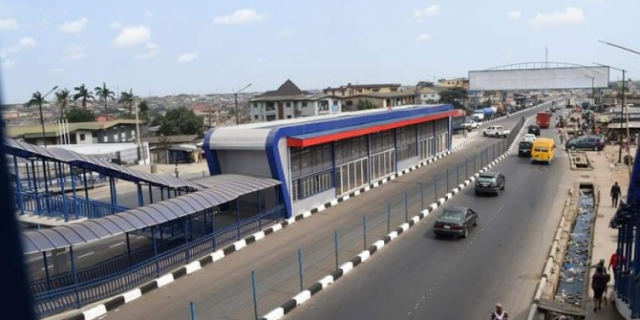 The Babajide Sanwo-Olu administration scored another quick-win penultimate week, with the four-in-one project aimed at an improved transportation and traffic management, which is the first pillar of its THEMES agenda.

Rolling out the four projects aimed at improving the travel experience of Lagosians living in border communities of the western flank of the state, Sanwo-Olu said he was happy that COVID-19 did not cripple the projects.

Unveiled by the governor was Terminal 2, of the Oshodi Transport Interchange (OTI), the flag-off of the Oshodi-Abule-Egba BRT corridor, the opening of the bus shelters/bus stops and the activation of e-ticketing called Cowry Card, by the Lagos Metropolitan Area Transport Authority (LAMATA).

Sanwo-Olu, who was happy to be part of the government that initiated the BRT project in 2008, saluted the visionary leadership instrumental to the birthing of the mass transit alternative to improve the travel experience of average Nigerians who have no access to private luxury.

He expressed happiness that he was birthing the third BRT corridor – Oshodi-Abule-Egba – coming on the heels of the Ikorodu Road to Ketu/Mile 12, and the Mile 12 to Ikorodu BRT corridors, delivered by his predecessors.

According to the governor, the BRT initiative is about improving journey time and travel experiences, adding that the Oshodi-Abule-Egba route that usually took about one and a half hours could now be done within 30 minutes in the comfort of air-conditioned High Capacity Vehicles (HCVs), unlike the rickety yellow mini-commercial buses.

He added that 80 HCVs dedicated to the routes have been released by the government, and 100,000 electronic cards (Cowry cCards) would be issued free to commuters on the route.

Sanwo-Olu said he had given approval for the deployment of 550 buses for Oyingbo and Ikeja, which has been divided into seven zones.

Speaking at the Iyana Dopemu, he said: “Our actions are to birth a new travel experience meant to ensure smooth traffic on our roads.”

Urging Lagosians to take ownership of the projects — the Terminal 2, BRT lane, the bus stops and e-cards — Sanwo-Olu said the initiatives were to drive a new initiative aimed at improving the quality of lives at the grassroots.

He said the Cowry Cards awere intended to integrate the government’s land, and waterways transits.

“The administration is passionate about ensuring that we have a one-stop shop meant to give our citizens a system that works for everyone,” Sanwo-Olu said.

Giving a detailed feature of the BRT corridor, LAMATA’s Managing Director Mrs. Abimbola Akinajo said the Oshodi-Abule-Egba BRT was a median running dual lanes of 3.5m width on each direction, and additional 3m width at bus stations for ease of passengers boarding, alighting and bus maneuvering at station areas.

She said the project has 14 stations with nine being single median stations (from Ile-Zik -Abule Egba), and five dual median stations from (Ile-Zik- Oshodi). The corridor is fitted with streetlights on both sides of the road and within station areas.

Mrs. Akinajo said the route would flag-off with an automatic fare collection system, which shortens boarding and alighting time. She added that the card is fast and secure, aids personal planning and budgeting and reduces challenges of cash exchange.

“Passengers only need to obtain the Lagos State Travel Card, known as Cowry Card, get it registered, load money and begin to enjoy a world of convenience in public transportation,” Mrs Akinajo added.

The Commissioner for Transportation, Dr. Frederic Oladeinde, said the government was excited that the BRT corridor would leave a huge socio-economic impact on the people.

Among others, Oladeinde said the BRT route would reduce journey time by about 35 percent, enhance public transport accessibility by up to 25 percent by BRT operation, reliability of public transportation by about 30 percent with the provision of dedicated BRT lanes, reduce cost with stable and efficient bus operations, smooth running rides along the BRT lanes and the use of well-zmaintained buses which would enhance commuters’ comfort.

He added that the BRT lane would be extended to Sango-Ota to cater for those living in border communities.

“All of these goes to show that the government is passionate about the welfare of the people and the Ministry of Transportation and all agencies are supercharged to ensure an efficient and stress free public transport system,” Oladeinde added.

But Lagosians urge the government to review the N300 fare, which they considered to be on the high side.

On Traffic Radio last week, many Lagosians carpeted the government for what they called “an exorbitant fare regime.

Mrs Abigail Kolade said the Oshodi-Abule-Egba fare used to be N100 which the yellow buses operators just increased to N200 during the COVID-19. She therefore wondered why government backed public transportation which enjoys public backing could shoot right to the roof.

Another commuter Peter Owolabi wondered how many poor and lowly commuters can afford N300 for a one-way trip on the corridor, asking the government to still work on the pricing to reflect the objective of public sector transportation.

While Mrs Akinajo sued commuters understanding the fare regime, the OTI Facility Manager Mr Yomi Solaja said the Interchange operator in collaboration with the regulator would continue to ensure that passengers continue to have the best boarding experience at the terminal.

He described the experience at the terminals in the last two weeks as encouraging adding that more buses would be rolled out once demand peaked along the corridor.