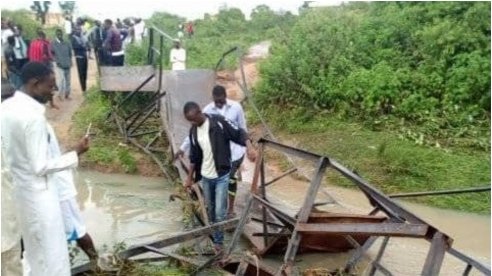 This action followed the collapse of the metal bridge linking classes with the student hostels at the Gubi Permanent Campus of the institution.

The incident which occurred on Aug. 5, at about 11 p.m., had claimed the lives of not less than three students of ATBU.
Prof. Mohammed Abdulaziz, the Vice Chancellor of the university, disclosed this at a news conference on the tragedy in Bauchi on Friday.

He said that many corporate bodies and individuals have indicated interest in assisting the institution since the incident occurred.

According to him, the Bauchi state government has promised to construct a road network within the campus while the Nigerian Air Force has offered to contribute to the development of the campus in order to make learning easier for the students.

He said United Bank of Africa also promised to build another bridge across the campus to facilitate student movement.

Abdulaziz Added that already corpses of the three deceased students have been transported to their respective places for burial, confirming that Salamat had been buried in Abuja.

The vice chancellor said the university has offered direct admission to qualified members of the bereaved families at a lower cost, among other palliatives being offered by the institution, though it is not in any way paying for the lost lives.

He assured that the university has put in place measures to avoid recurrence of such disaster in the future.

The Pro-Chancellor and Chairman of ATBU Governing Council, Mrs Nimota Akanbi, lamented that the disaster has naturally thrown the university community into grief of unimaginable magnitude.

“As believers in the faithfulness of Allah, we cannot but thank Him for the limit of the catastrophe. It would have been worst if larger number of our students were leaving the campus for their hostels after reading overnight to prepare for examination,” she said.

Akanbi said that the university has already constituted a 7-man committee to carry out a thorough investigation on the causes of the incident, recommend ways to improve safety on the campuses, ways to avert future occurrence and submit its report within a week from today.

She however appreciated the Nigerian Army and Air Force; UBA; Gov. Bala Muhammad of Bauchi; the Emir of Bauchi, Dr Rilwanu Suleiman Adamu, as well as individuals and corporate bodies for their timely intervention to the disaster.