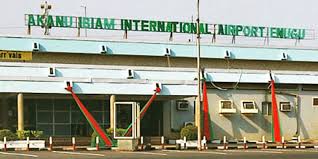 Chief Emma Akpaka, President of the association made the appeal on Wednesday in Enugu during a visit to monitor rehabilitation work at the airport runway which started about a week ago.

Akpaka said that the airport would serve the South-East better since it would have more international freight flights, mostly undertaken by jumbo aircrafts.

He said that this would also help the needed revenue to get to the government.

“The airport acquired international recognition in August 2013 when Ethiopian Airlines landed with South-East passengers and departed with Addis Ababa and New York passengers.

“As we speak, other international airlines still agitate for landing permits at the airport,’’ he said.

The president however, lauded the rehabilitation work on the airport runway saying, “it is good that the government is prioritizing safety of citizens and foreign nationals using the airport’’.

Akpaka called on the government to hasten the rehabilitation considering the number of families that were dependent on the airport for survival.

He also said it was necessary to hasten the work to enable business groups individuals that needed to use it to bring in some legitimate goods for sales during yuletide season.