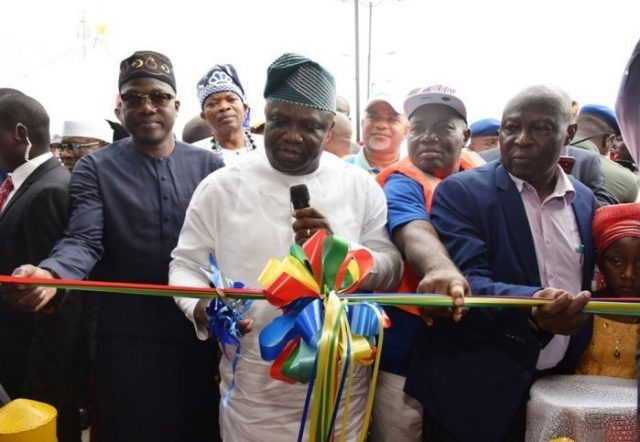 Gov. Akinwunmi Ambode of Lagos State on Tuesday inaugurated the Bariga Waterfront Jetty with seven ferries as well as a new access road in the Ilaje-Bariga area of the state.

Ambode said the projects were efforts geared toward decongesting the roads and encouraging more people to use water transportation.

He said the ferry services would help residents of Ilaje-Bariga to get to other jetties at Ikorodu, Marina, Falomo and Badore areas of the state.

“This jetty has a 150-car parking lot to enable motorists park their cars comfortably and get on a ferry to other parts of the state.
“The new Ilaje road will serve as a good access road to the jetty as well as the opening up of the community.

“Of the seven new ferries we are commissioning today, four are passenger ferries while one is a car barge which can move cars to the other jetties as may be required by people, who want to drive in the other locations.”

Ambode said that with this, the state was firmly on track with the goal of establishing an integrated transport management system which would continue to impact positively on the lives of people.

He expressed confidence that the next administration would build on the progressive strides the state had recorded in the past 20 years.

The Commissioner for Works and Infrastructure, Mr Ade Akinsanya, said that the facilities would galvanise the state’s economy.

According to him, the car park accommodates no fewer than 150 cars and the 1.1km road has street lamps and a bicycle lane.

The Baale of Ilaje-Bariga, High Chief Kayode Ayetiwa, thanked the governor for the facilities, saying that they would ease the movement of people from Bariga to other areas of the state.

“We salute your courage for providing the facilities and we assure the government that the community will protect them,” he said