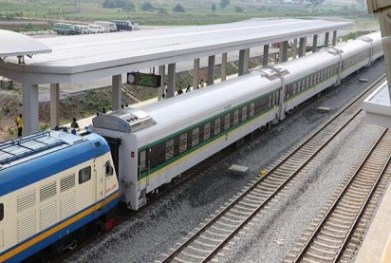 The Minister of Transportation, Rotimi Amaechi, has said the 323km Itapke-Warri standard gauge rail line will be extended to Abuja if the approval is granted by Muhammadu Buhari, the  President  of Nigeria.

Making this known during an inspection, the minister noted that the extension would make the rail line that cuts across three states (Kogi, Edo, and Delta) more impactful to Nigerians who travel on that corridor.

It should be noted that the contract was awarded to the China Civil and Engineering Construction Corporation (CCECC) Nigeria Limited at the cost of $122.6m and it’s expected to be delivered by March, 2019 but the minister has said the contract must be completed before the end of 2018.

“I will have to convince the president that it is a relevant project. If he agrees, then we can value the project. But I don’t think the extension should cost more than $100m.

“If the cost will be about $100m which is N36bn, then I can convince the president to approve it. If we get to Lokoja, we have solved a lot of problems and we would have helped a lot of people going to Warri and even coming to Abuja from that axis,” he explained.

Shedding more light on the time frame, he said he is mounting pressures on the contractors (Julius Berger and CCECC) to complete the job before the end of the year, adding that he jhad expressed dissatisfaction over the pace of work done so far.

“Julius Berger said they will complete their own contract and leave site by August. CCECC is where we are having problems, they are saying the contract completion time is 2019 but we are insisting they must complete this year,” he said.