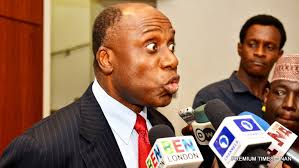 The Minister of Transportation, Rotimi Amaech attacked his predecessor, the Governor of Rivers Nyesom Wike for condemning the proposed Porth Harcourt to Maiduguri rail line. and the Bonny Sea Port projects.

The Minister said that Wike did not base his argument on fa t.

According to Amaechi, the comment made by Wike that multi-billion naira is a bait to deceive Rivers people ahead of the 2023 general elections, was “careless”.

He said tthat the 2023 general election still two years away, asking Wike to be careful of his tongue.

“I am not garrulous in that nature. I speak intelligently knowing that when I speak it matters. I don’t drink alcohol so I don’t speak out of my sense.

“Go back and listen to all my statements as a Governor. I don’t just get up.

“I am one man who has been in politics for too long that sometimes my wife thinks that we should retire; I’ve been Speaker for 8 years, I’ve been Governor for 8 years, I’m now Minister for 6 years, I was Special Assistant for 2 years under Governor Rufus Ada-George. I have been in public office and I know the importance of making a public presentation,” Amaechi said