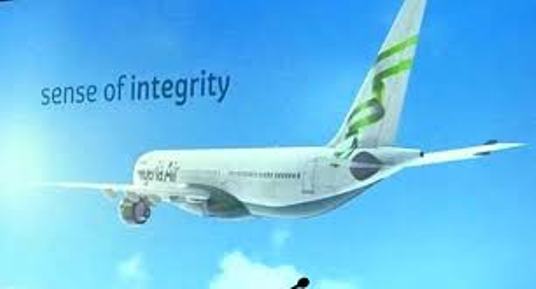 The Minister of State for Aviation, Hadi Sirika, says the Federal Government is not paying 300 million dollars for a five percent stake in the Nigeria Air recently unveiled in London.

Sirika gave the clarification in a statement by James Odaudu, Deputy Director, Media and Public Affairs, Ministry of Transportation, on Tuesday in Abuja.

The minister was quoted as explaining that eight million dollars to be provided by the Federal Government represented the startup capital for offices and other facilities required for takeoff.

He added that the 300 million dollars was the entire airline cash flow funding requirements for aircraft, operations and working capital for three years 2018 to 2020.

According to him, this funding can be in the form of equity or debt.

“In order to ensure take-off of the airline in 2018, the government will provide $55 million upfront grant/viability gap funding to finance startup capital and pay commitment fees for aircraft to be leased for initial operations and deposit for new aircraft whose delivery will begin in 2021.

“The government is not funding the entire project. It’s just providing startup capital in the form of an upfront grant/viability gap funding.

“Once the strategic equity investor is in place, they will be expected to build on the initial investment made,” he said.

The minister said the strategic investor would only become known after the public-private partnership procurement process was completed.

On the shares, he said the company’s shares would be sold through an initial public offering after which the government would own five per cent equity.

Sirika added that government’s equity share held in trust for Nigerians would be devolved to Nigerians via an Initial Public Offering (IPO).

According to him, the government will retain only five percent equity, the list of shareholders then will be available to the Security and Exchange Commission (SEC) and the Nigerian Stock Exchange.

“The rest of the 95 percent equity of Nigeria Air Limited will then be owned by the strategic equity investor and the general public.

The minister further disclosed that the airline would begin operations with dry leases and the domain, www.flynigeriaair.ng, which would become active soon.

He added that someone had already registered nigeriaair.ng apparently in anticipation of a buy-out by the proposed airline.

He said that Nigeria Air Limited has been incorporated with the Corporate Affairs Commission (CAC) for now as a wholly government owned company with the corporate affairs commission using nominal directors, who are directors of the ministry of aviation.

The minister noted that on conclusion of the PPP procurement process, the incorporation would be updated and certificate of incorporation made public, when full equity structure pre financial close is finalized.