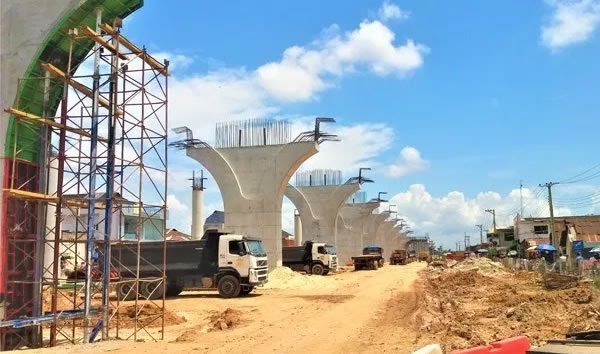 The Speaker, Lagos State House of Assembly, Mr Mudashiru Obasa, has assured people of Agege  on the speedy completion of the flyover project in the area.

Obasa gave the assurance during the Constituency Stakeholders’ Meeting in Agege Local Government area in Lagos.

The 1.4 Kilometres Flyover, which will run from Agege down to the Abeokuta Expressway, was started in 2018 by Gov. Akinwunmi Ambode’s administration.

Ambode had pledged that the project would be delivered in November 2018, a period of 10 months.

The Baale of Dopemu (Area Chief), Alhaji Shuaib Ajani-Shitta, had during his presentation decried the slow pace of work on the ongoing Agege Flyover project, which had been on for over six months.

Ajani-Shitta called for speedy completion of the project as well as reinstallation of street lights in the area, saying lack of this had left the area in darkness and encouraged crimes.

“Our security lights have been off for over six months; we appeal to the speaker to light up our streets,” he said.

Responding, the speaker said: “There is nothing like abandoned project in Lagos. “We will continue the project. We will see to it that the project is completed.”

Obasa appealed to the residents that the traffic congestion accompanying the delay in completion of the flyover project would soon ease off.

He decried theft of streetlights, and called on residents, council officials and traditional rulers to watch over government property in their areas.

The speaker cited as an example a contractor that removed a generator powering a street after the installation in broad daylight without any resistance or questions from residents as unacceptable.

Responding to issues of indiscriminate refuse disposal and drain stuffing, Obasa said the law was clear, adding “whoever disposes refuse on the road will henceforth be apprehended”.

On the dreaded Awawa Cult in Agege, Obasa urged the community to get involved in the rehabilitation of the cultists, adding that the responsibility should not be left to government and police alone.

“The council can also educate them on the need to adopt positive values to become useful to themselves and the society,” he said.

Responding to issues of unemployment and youths empowerment, he advised residents to embrace skill acquisition and discourage over-reliance on white collar jobs.

The speaker had earlier appealed to Lagos residents to comply with the state’s sanitation laws and collaborate with the state government by imbibing right attitudes to save the environment.

Obasa, who is the Chairman, Conference of Speakers in Nigeria, said that the aim of the meeting was to have a first-hand assessment of the needs of the constituency.

“Based on our past meetings, we have been able to understand some socioeconomic and infrastructure challenges in various constituencies.

“As a way forward, my good self together with the leadership of the Lagos State House of Assembly have decided this time to present and address issues of environmental challenges.

“This is why the theme for this edition is: “ENVIRONMENTAL CHALLENGES: COMMUNITY ENGAGEMENTS TO FACILITATE LASTING SOLUTION”.

“We recently deliberated extensively at our Plenary Session of July 23 on the increasing and threatening environmental issues in the state, including flooding, drainage-related matters and the need to proffer necessary solutions,” Obasa said.